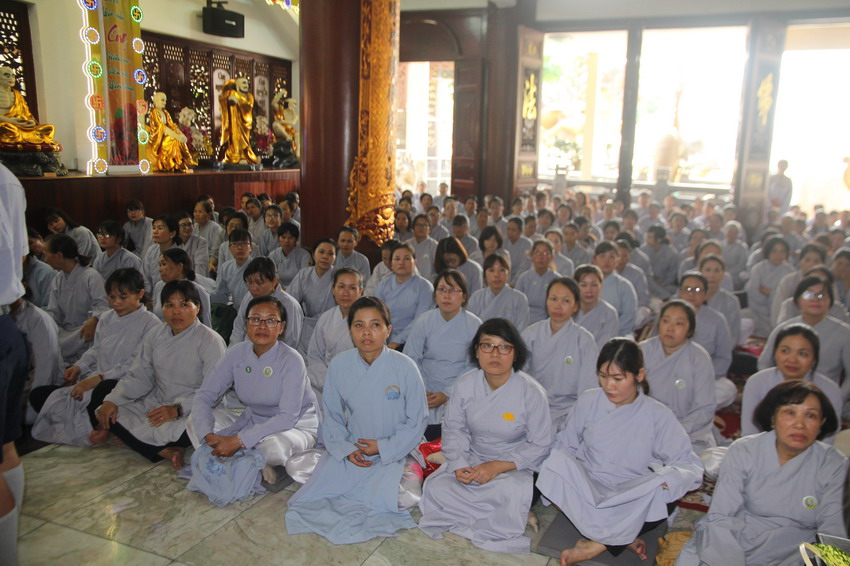 The ceremony of offering hand-made lotuses to render gratitude to the Four Great Debts and pray for world peace and sentient beings happiness was organized at the prayer hall of Phap Van pagoda at 7pm with the participation of more than 200 VBYA members. The ceremony was witnessed by ten most venerables and venerables co-headed by Senior Most Venerable Thich Phuoc Tri, Senior Most Venerable Thich Luu Thanh. Elder Brother Nguyen Hoanh Le Van San, VBYA Dung rank leader, on behalf of the organizing committee, prostrated himself in front of the main throne of the Three Jewels to read a spiritual speech on rendering gratitude to the Four Great Debts namely the debt to the Three Jewels, the debt to parents, teachers and religious masters, the debt to spiritual friends, and the debt to home land, community and all sentient beings. He also emphasized the gratitude to the Vietnamese kings and leaders in their virtue and conduct of  founding, developing, and safeguarding the country, and to the noble Buddhist source created and transferred from buddhas and bodhisattvas of previous generations to generations of Buddhist ancestors along with the Vietnamese history up to the present.

Afterwards, the sangha present led the prayer service, and everybody at the ceremony place prostrated themselves to unanimously recite prayers. Then candles in hand-made lotuses were lit up and transferred from the witness sangha to all the prayers. The walking meditation took place in the silent and sacred atmosphere of the ceremony, all the prayers walked mindfully around the pagoda holding the lotuses in front and chanting “Namo Great Compassionate Bodhisattva Avalokitesvara” so as to pray for world peace and sentient beings happiness. The ceremony came to an end at 9 pm after all the participants had put out the light, the light of compassion and wisdom, and brought it into their hearts. 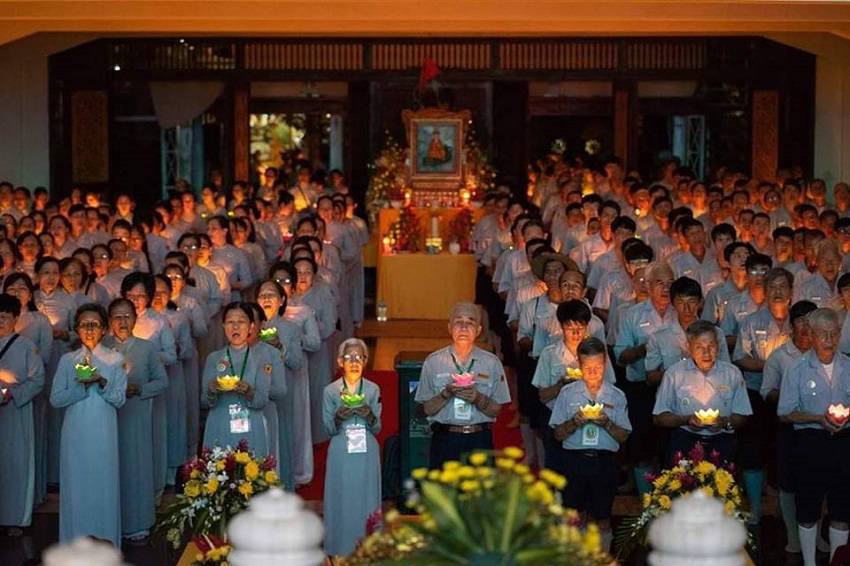 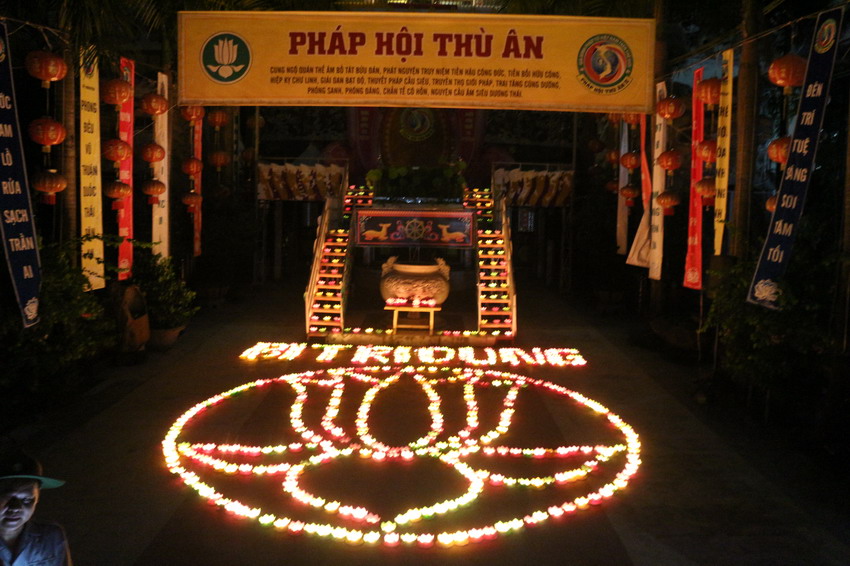 Prayer services of reciting Ksitigarbha Sutra – the Earth-Store Bodhisattva’s Original Vows Sutra and chanting request addressed to the Lord of the Western Paradise for saving the souls of the deceased were successively organized in the morning and afternoon of Day Two. The whole prayer hall was almost full of VBYA leaders and members during the services, and the services were led by venerable monks in the assembly. 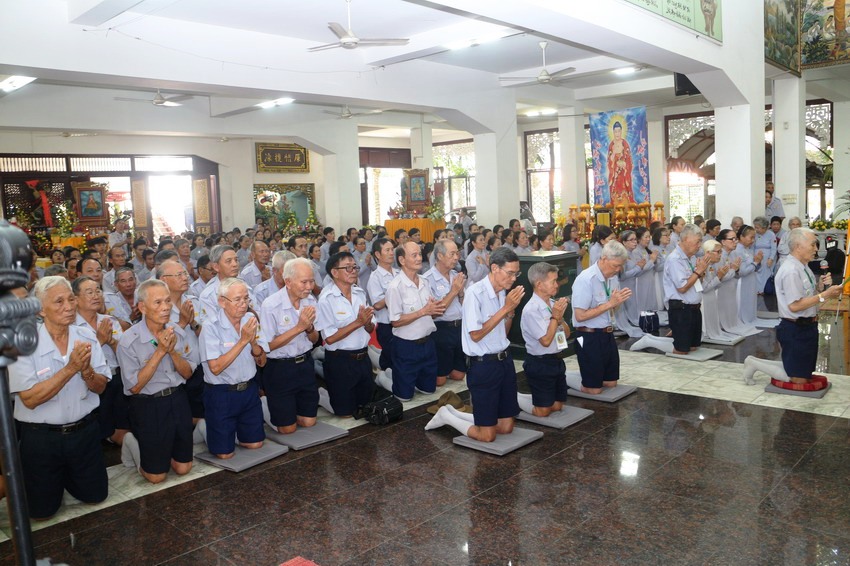 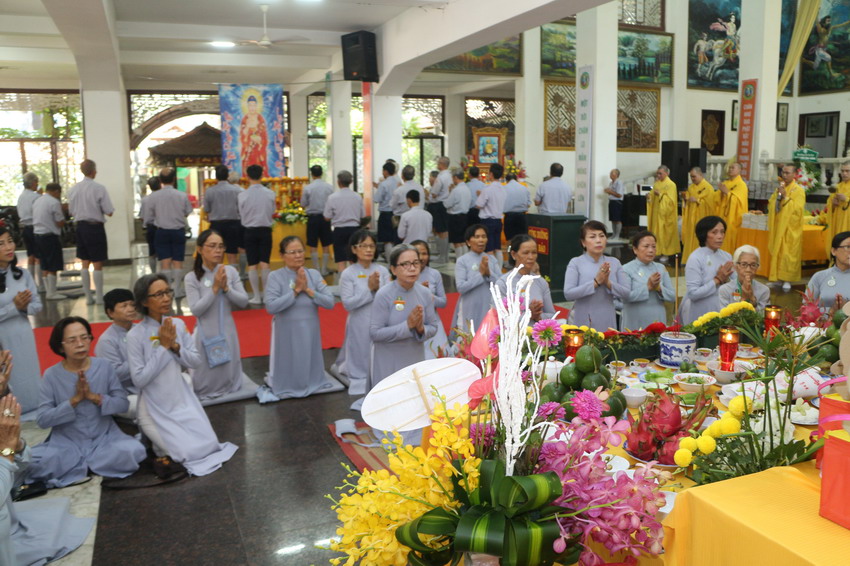 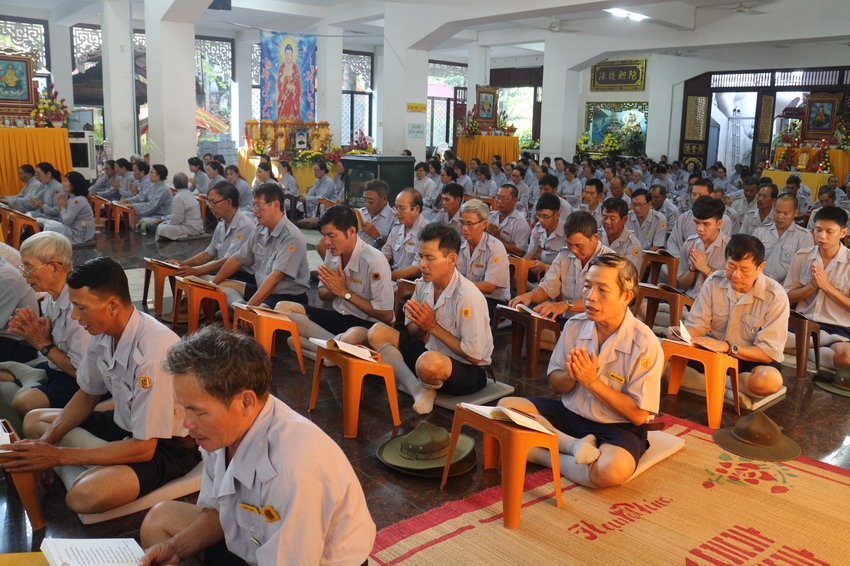 The ceremony in memory of virtue of the Four Great Debts and death anniversary of all the deceased was organized on the morning of Sunday, October 28, 2018 at 9am, at the prayer hall of Phap Van pagoda. The ceremony was witnessed by Most Venerable Monks in the Council of Senior Sangha and the Council of Education and Sila of VBYA, headed by Senior Most Venerable Thich Minh Chieu. There were more than 500 leaders and members of VBYA participating in the ceremony. After the speech made by Elder Brother Nguyen Hoanh Le Van San, Dung rank VBYA leader on behalf of the organizing committee, Senior Most Venerable Thich Minh Tam, gave a dharma talk to the whole ceremony pointing out virtue and conduct of Buddhist ancestors and national ancestors who made contributions to founding, developing and safeguarding the country through stages up to the present. These virtue and conduct must be realized and repaid by present and future generations of Buddhist followers and VBYA members. The prayer service was conducted afterwards and the ceremony ended at 10:30 am. 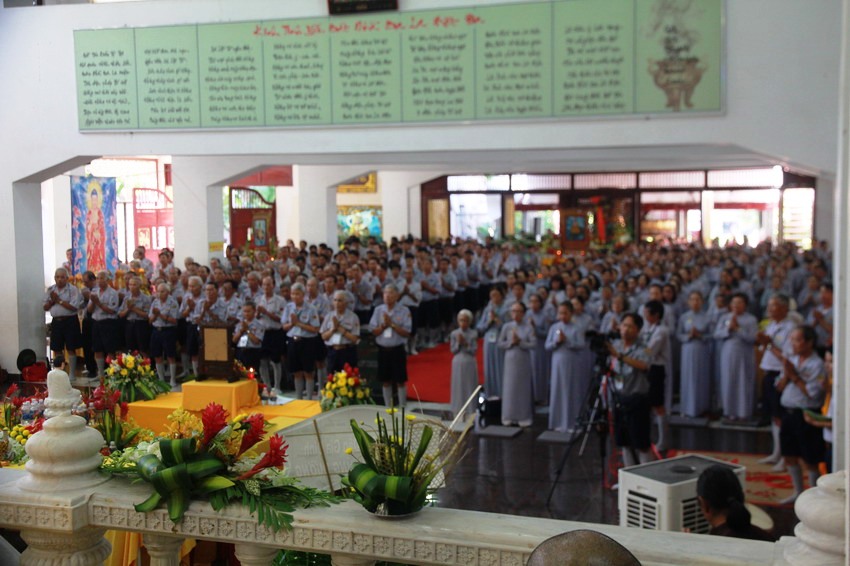 Afterwards, the ceremony of offering noble gifts of Lam care for leaders and members of VBYA was organized in the afternoon of Sunday, October 28, 2018, at the prayer hall of Phap Van pagoda. There were 200 VBYA leaders and members who received gifts of LAM care on the occasion of the Dharma Assembly of Gratitude II. 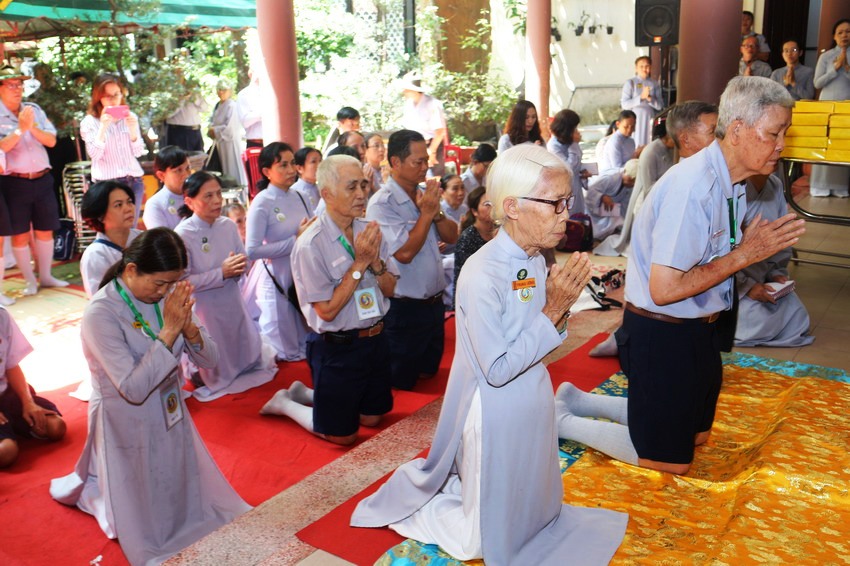 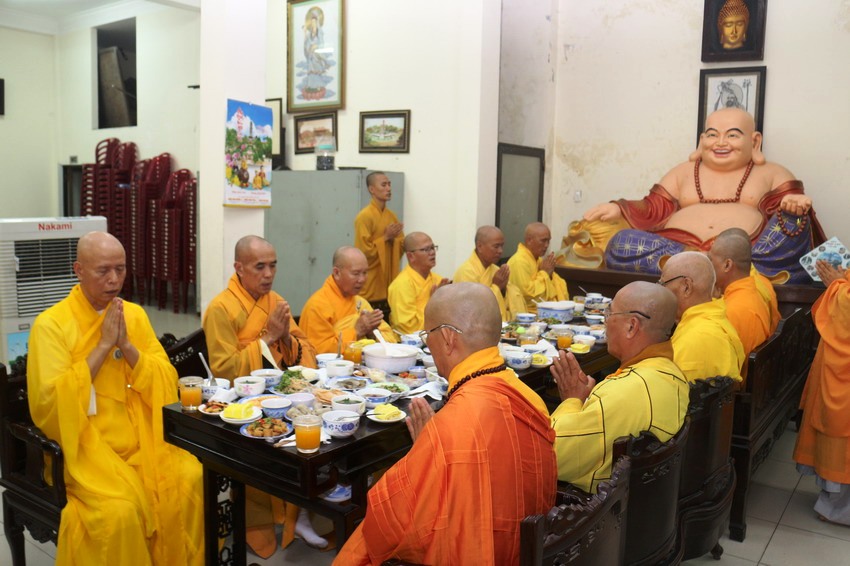 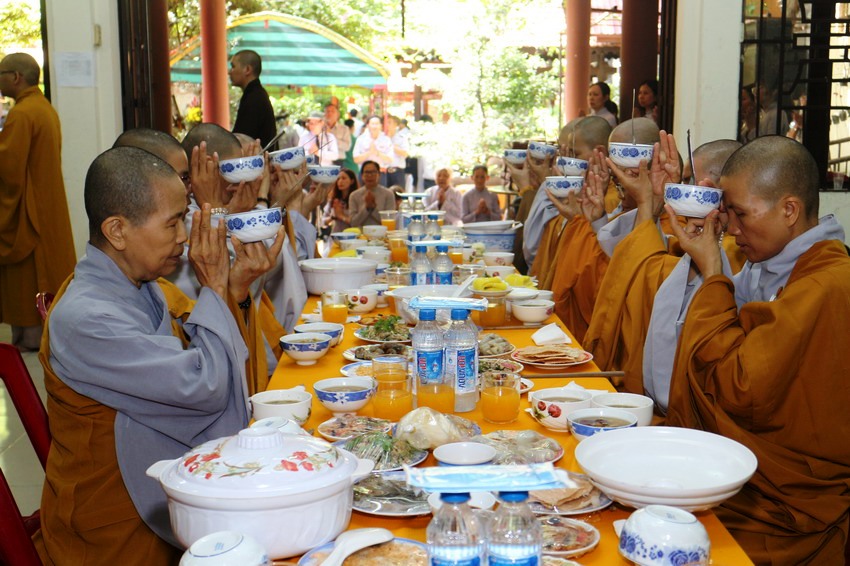 Eldest Brother Nguyen Tin Nguyen Chau, President of VBYAW, who is at present 96 years old, together with his wife, arrived at Phap Van pagoda right after the ceremony in memory of virtue and conduct of the Four Great Debts and death anniversary of all the deceased on Sunday, October 28, 2018. All the Dung rank leaders, and about 300 WBYA leaders and members present at the assembly was very delighted at the prayer hall to welcome and gather around “Big Brother – ANH CA”, and his wife who made every effort to attend the assembly. The meeting was witnessed by most venerables and venerables of the assembly. 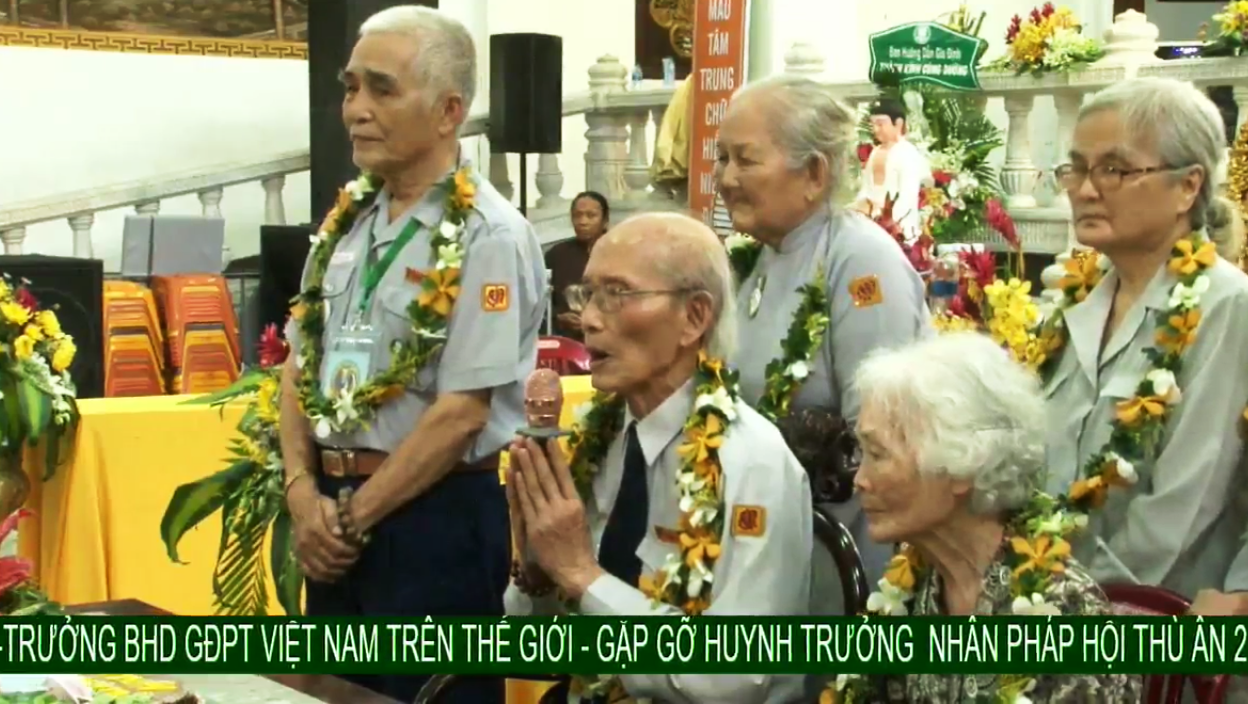 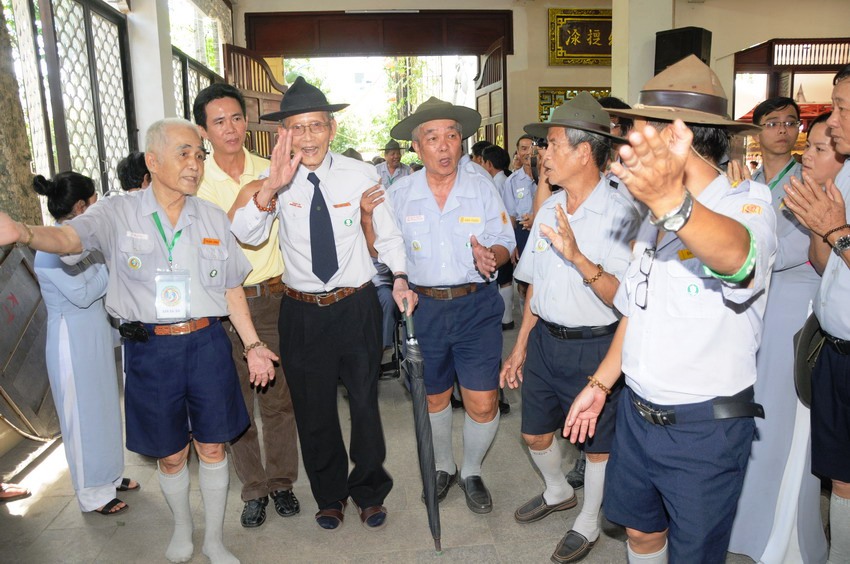 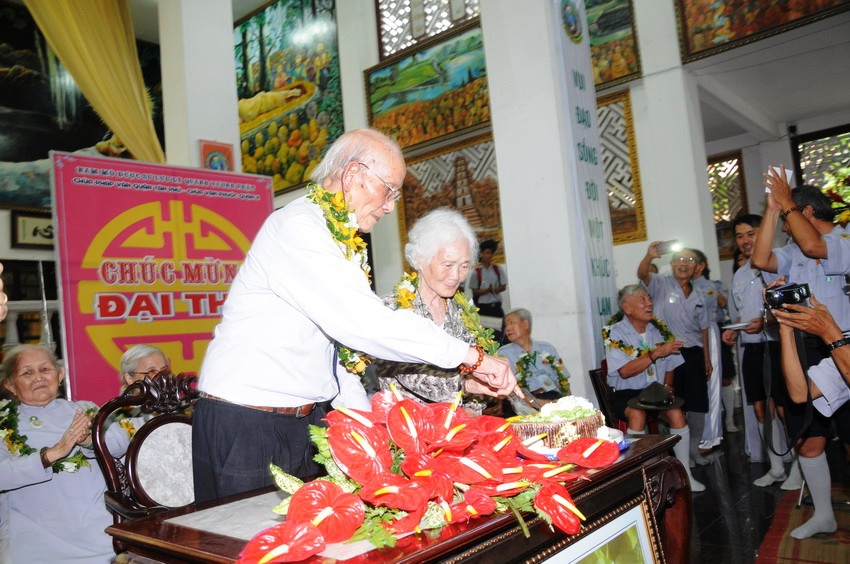